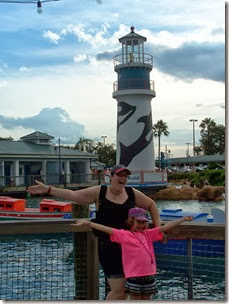 Since we got home so late from the Magic Kingdom the previous night, we slept in and got a later start at SeaWorld. It definitely was the right decision even if it meant that we missed out on some of the attractions. We kept things relaxed all day and moved at a slow pace. I don’t know about anyone else, but I wasn’t feeling that well to start the day and remembered getting heat stroke the last time that I was at SeaWorld.

The first thing that I noticed was that SeaWorld put in a lot of trees when they built the Manta coaster. This was a welcome change from the last time I was at the park (approximately 10 years ago) when it seemed like there was no shade to be found. The other thing that I noticed was that SeaWorld has a ton of pressed penny machines. They’re all over the place, but not many of the designs are memorable. I got a couple of dolphins and penguins as well as pennies of the rides that I liked, but I passed up most of the pennies that were available. 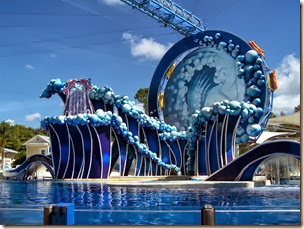 We started our day at Stingray Lagoon feeding and petting the rays. After a timid start, Cass was soon petting the rays along with Jenne and I. She had passed up the opportunity a few times previously at other locations. The line was already long for the next dolphin feeding opportunity, so we kept going into the park. We checked out the dolphins underwater for a little while before making our way to the Dolphin Theater right before the show started. It’s a cool show that combines aerial acrobatics and diving with dolphins doing tricks.

SeaWorld can be a pain in the ass to experience. You have to keep an eye on all of the different show times and then fit everything else in between those times. It’s not exactly my idea of fun. It’s one thing to pick a time for a FastPass+ and dining reservations, but scheduling my day around a bunch of arbitrary show times is no fun at all. Part of it was that I really didn’t do any research at all on SeaWorld. It was kind of an afterthought compared to everything else. We had a great day, but with more knowledge it could have been better. 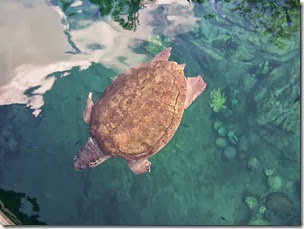 TurtleTrek was our next destination. Having seen this once, I would probably skip this on the next trip. It’s a 3-D movie in a dome showing you the experience of a turtle from birth to adulthood. For what it is, it’s really not worth the wait and the waits can get long at SeaWorld because there really aren’t a lot of attractions to occupy the people in the park. Outside of the ride, you can see turtles, manatees, and alligators. They shouldn’t be missed, but the ride is something you can skip.

From there, it was my turn to check out Journey to Atlantis while Jenne and Cass checked out the Jewels of the Sea Aquarium. Thanks to the single rider line, I was on and off of the ride in no time. This is a fun flume ride with a little bit of a coaster added to the end, but the themeing is terrible. If I understand it correctly, a seahorse guides you to the lost city of Atlantis. This same seahorse squirts water in the wrong place and pisses a lady off who exiles you from Atlantis. Lame. Fun ride, but just keep your eyes closed for the beginning of it.

It was now time for lunch so we walked over to the Terrace Garden Buffet for pizza, pasta and salad. The food was ok. The quantity made up for a lack of quality. Since it was a buffet, we were in and out quickly and able to continue our day. We checked out the sharks and walked through the awesome underwater tunnel at Shark Encounter. We then made our way to the Seaport Theater for the animal show. This show was funny and entertaining. It was a nice rest in air conditioning as well. From there, I got in line for the next dolphin feeding while Jenne and Cass visited with the rays again.

Although I’ve done it before, feeding the dolphins was very cool. This was a better experience than it had been in the past where food was always for sale and there were a ton of people 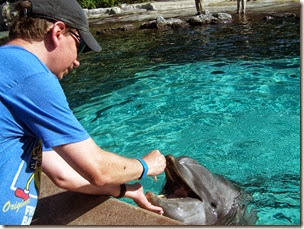 around Dolphin Cove. Now they have a separate area for the feeding, it’s not crowded, and they direct you on how the dolphins have been trained to be fed. You put your hand on the bottom of their head and then put the fish in their mouth. They don’t give you a lot of time because they want to bring in the next group of people at $7 a head, but it’s enough time to snap a few pictures and hang out with the dolphins. The only disappointment was that the SeaWorld photographers didn’t get any pictures of Jenne or Cass feeding the dolphins. They’ve got a great perspective from across the water and take some pictures that usually come out really well. They got some nice pictures of me and we ended up buying one with a couple of the pictures that they took of us upon entering the park.

Cassidy had her heart set on seeing the Shamu show while the prospect of watching a killer whale swim around for a half hour didn’t interest me at all. Since Cass was freaking out about going on Antarctica: Empire of the Penguin, we decided that I would go and wait in line for the ride while Jenne and Cass went to watch Shamu. The wait time was listed at 40 minutes, but that wasn’t accurate. I think it was around 20 minutes before I got on the ride. Unfortunately, on the way to the Shamu Show, Cass started feeling badly and decided that she wanted to go on the ride after all. At this point it was too late, but Jenne had a hard time getting her to the show.

The Antarctica ride has a really cool ride system that is kind of wasted. I don’t know if it is due to space limitations, but the ride is really short. Very cool, but very short. The ride vehicle is 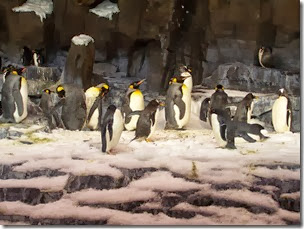 round with two rows with four seats each. There’s no track, instead the vehicles are programmed on their course around the ride. You spin and slide around a pretty looking room and then go past a couple of screens where your ride vehicle becomes a motion simulator moving in time with the action similar to Star Tours. The best part is the end where you find your way back to the rest of the penguins and your ride vehicle turns around to reveal the awesome penguin habitat. The habitat is 0º and wide open, so you’re going to be cold. It’s amazing how close you are to the penguins. Even if you don’t like the ride (and there is a mild version for those who don’t want the bumps), it’s well worth it just to go and see the penguins.

Since I got through the line a lot quicker than anticipated, I started to make my way over towards Shamu Stadium. I thought that I might get there in time for the show to start, but I didn’t get through the ride that quickly and had spent some time in the gift shop looking around. SeaWorld may have a ton of pressed penny machines, but they don’t have a lot of pins; not pins that interested me anyway. Oh well, we spent enough money on food to feed the animals there.

On the way to meet the rest of the family, I contemplated going on the Manta lay-down coaster since there was just a 5-minute wait, but my neck had been bothering me all day and I was already a little nauseated and decided to skip it. I didn’t realize that there was a manta aquarium there to look at until spotting it on the map after the fact. Oh well, we know that there would be things that we would miss due to the late start and since we had already spent a good chunk of time petting rays, just looking at them swimming around probably wouldn’t be that big of a deal. 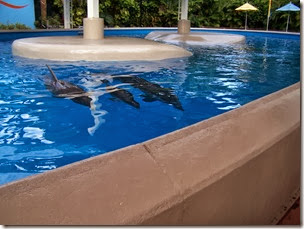 I stopped along the way and spent some time at the Dolphin Nursery. You don’t get to stand that close to the water which limits your visibility of the dolphins. It’s done to protect the baby dolphins, but maybe they should move the viewing area back a little further and then elevate it a little bit so that you are looking down into the water. No one really wants an exhibit that you can’t really see.

At this point, the Shamu Show was about to end, so I just waited outside for Jenne and Cass to come out and meet me. Cass loved the show and seemed to be in better spirits so that was good. We made our way out of the park after a little shopping and a quick purchase of some pictures from our day at the park. They’ve got a great deal at SeaWorld for 3 pictures with frames for either $30 or $35 (I forget) which we couldn’t pass up for the shots that they got. This was far from the end of our day though. Jenne’s sister, Patrice, had decided to stay an extra day in Florida since we’d have some time after SeaWorld to hang out with her. Our plan was to have dinner somewhere at Downtown Disney, but it was ridiculously crowded once again and so after checking out a couple of shops, we made our way back to Pop Century with Patrice and made the trek across the bridge to Art of Animation for dinner and to check out the resort. Before I get to that, I’ve got to share a picture of the awesome Sorcerer Mickey statue that I got in the Arribas Bros. store. I could easily spend thousands of dollars in that store, and that’s just on Sorcerer Mickey merchandise! I’ll post all of our cool stuff after I’m done with the trip, but this statue was too cool to save until the end.

The Art of Animation resort is awesome and I think it would be the perfect place to stay on a trip with grandma since they have family suites. The choices at the food court for dinner were much better than those at Pop. I ended up going for a cheeseburger with bacon and popcorn shrimp on it which was delicious. I had a delicious dessert as well, but I don’t remember exactly what it was at the moment. I’ll have to see if I can find it on my receipt. It’s not on any of the food review blogs that I see.

Once our meal was done, we browsed around the resort gift shop. Even their shop was cooler than ours. There was a bunch of resort specific merchandise while there was none to be found at Pop. They also seemed to have cooler items at AoA instead of the junky items at Pop. Jenne found an awesome white 2013 sweatshirt that we hadn’t seen anywhere else that I told her had to come home with her. We looked around the resort a little bit more and then sadly made our way back across the bridge to our room at Pop Century. Cass and I got ready for bed and called it a night while Jenne took Patrice back to her car at Downtown Disney.