Now that we had our party wristbands and had found Patrice, we were ready to get started on the second half of our day. Our first stop was the Fire House on Main Street so that we could pick up our special Sorcerer’s of the Magic Kingdom Halloween card. With Haunted Mansion cards acquired, we grabbed our costumes from our lockers and got changed for the party. Cassidy was Merida, Jenne was Mabel Pines, and I was Dipper Pines. Patrice was already in her Esmeralda costume so we were all set for some Halloween fun.

Our main plan was to take advantage of the shorter wait times during the party to power through the rides that we hadn’t gotten to earlier in the day. While the parade and fireworks are both very cool during the party, we’ve seen both before and sitting around for those things just feels like a waste of money to me. Last trip, we spent the majority of the party sitting in Main Street eating our dinner, staking out a spot, and watching both the parade and fireworks. After that, we had time for a visit to the Princesses and that was about it. This time around was going to be different.

We had a little bit of time before our 7:10 dinner reservation at the Liberty Tree Tavern so we made our way to Adventureland where we hopped onto The Magic Carpets of Aladdin. When our carpets landed, we made our way to Frontierland so that I could purchase some of the special MNSSHP merchandise. I’m sure they had stuff last time we were here, but I knew nothing about it. This year, I picked up the special event pin and one of the blind boxes of Disney characters dressed up as characters from The Nightmare Before Christmas for Jenne. The items went on sale at 7 so it was cutting it close to our reservation, but since it was just a couple of buildings away, we didn’t have a problem. We once again arrived for our reservation right on time.

The Liberty Tree Tavern serves a meal that is very close to Thanksgiving Dinner. It’s family style and all you can eat salad, roasted turkey breast, carved beef, pork brisket, mashed potatoes, veggies, stuffing, and mac and cheese. This was a ton of great food. I think I finally found a table service restaurant that I like in the Magic Kingdom. The service seemed a lot slower than it should have been for a meal where everyone is getting the exact same thing, but it wasn’t bad and gave us time to rest up for the remainder of our night. We finished eating while the first Boo To You Parade was going on, but we were able to get from the restaurant to the bathrooms at the shortcut to Adventureland without any problems. I led us over towards the back of Frontierland because I figured that it would be smooth sailing to get on Big Thunder Mountain Railroad. There wouldn’t be a line, but getting across the bridge to that area proved to be a pain again. This time it was due to an awesome photo opportunity. The full moon was perfectly framed between the spires of Cinderella Castle. After trying a bunch of different settings on my camera, I was finally able to get a decent picture. It’ll look even better once I get a chance to crop it.

Big Thunder Mountain is a good ride, but it’s better at night than it is during the day. If you haven’t ever checked it out at night, give it a chance. This ride and Splash Mountain both become something special if you ride them during the fireworks. Haven’t done that yet? Give it a go on your next trip. 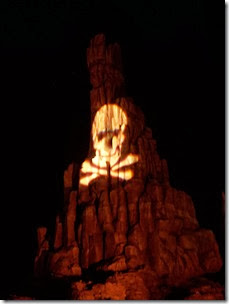 The parade had finished by the time we started making our way through Liberty Square to Fantasyland. Most of these wait times were still ridiculous so we skipped most of the dark rides there. Mickey’s PhilharMagic is one of my favorites and Cassidy wanted to make sure that her Aunt Patrice saw it so we walked right on and waited for the next show. This ride just simply celebrates Disney Magic. You’ve got Disney classics Mickey and Donald combined with some of the great Disney music from the 90’s. This is always on my must-do list. Upon exiting, Cass made sure to show Patrice where Donald landed after getting launched out of the tuba at the end of the show.

We exited the gift shop just as HalloWishes was starting. At this point, a lot of the attractions in Fantasyland were closed due to the fireworks so we made our way back to New Fantasyland. Cass had been eager to see the new Enchanted Tales with Belle all day, but when we checked earlier we saw wait times of 40, 30, and 40 minutes which seemed too long to wait. The wait time was now 20 minutes so we jumped into line. While we were waiting for the show, we found out that Maurice’s cottage is a great place to watch the fireworks. The main fireworks are right in front of you, the rooftop fireworks are behind you, and the perimeter fireworks are all around you. Somewhere towards the back of New Fantasyland might be an even better spot to watch from. 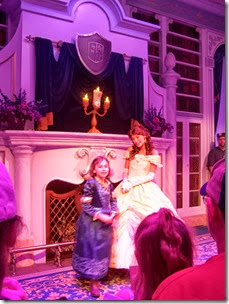 I’m not going to discuss this attraction. I went in knowing nothing about it and I think you should as well. I’ll just say that this attraction, more than anything I’ve seen at Disney as an adult, reminded me of the magic that I felt going to Disney as a kid. All of the thrill rides that Disney has added are cool, but it’s the attractions such as this one that separate Disney from all of the other theme parks out there. Universal matches and at times exceeds Disney when it comes to themed thrill rides, but they don’t have much when it comes to these sort of attractions. The closest was Poseidon's Fury back when it was new.

If you go to Disney with little ones, you have to check out this attraction. You still want to see it if there aren’t kids with you, but if you there are then this will definitely be one of the highlights on their trip. I know it was for Cassidy.

Now it was time for some Trick or Treating! Instead of going from candy location to candy location, we decided to save time and just do the Trick or Treat trail leading from Tomorrowland back to Fantasyland. No line for Buzz Lightyear meant it was time to ride that again and this time we had our ride photos added to our PhotoPass+. It took a while because the two people working there were tied up for a long time and the guy restocking the shop didn’t seem to care that a long line was forming.

The long wait almost cost us, but we just made it in time for the last Monsters Inc. Laugh Floor show of the evening. We didn’t get a chance to submit a joke (last trip one of our jokes was used), but I was Randall in the show. I’ve seen the show so many times that I know how to disappear so I didn’t get the usual mocking that people get when they can’t figure it out. I’d have to say that this was the funniest Laugh Floor show that I’ve seen.

On the way out of the park, we hopped into like to see Jack and Sally from Nightmare Before Christmas. Midnight arrived and the line was still long and we were all fading quickly. Everyone was willing to stay so that Jenne could do the meet and greet, but with a wait of possibly another hour to go, we all decided it was time to call it a night.