When I first planned this trip, I thought that this flex day was going to be spent at Universal Studios. On our last trip, we didn’t get through both parks in two days and I was worried that this might be the case again. We had much better luck this time around and visited both parks on both days. That left the flex day open for us to add even more new experiences to our trip.

While we had done some of the Agent P World Showcase Adventures on our Epcot day, I completely forgot that the France adventure allows you to obtain a special pressed penny that 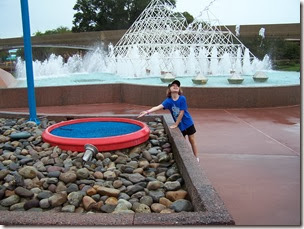 you can’t make just by walking up to the machine. We got to Epcot right when the park opened and started off the day with our FastPass at Soarin’. From there, we went to the Imagination pavilion since we didn’t make it here earlier in our trip. We followed up the ride with a visit to the returned Captain EO 3D movie. I’m not sure why, but the 3D didn’t work for me at all during the movie. While it was great to travel down memory lane, I think we’d skip this movie if it were still there on our next trip. From there, FastPasses at Test Track awaited.

At this point, the World Showcase had opened and we made our way to France to foil the evil plans of Dr. Doofenshmirtz. We completed the adventure without getting the part of the mission that gives you the special pressed penny. That was a huge bummer and we didn’t have time to try it again because it was now time for our lunch reservation at Chefs De France.

This meal came close to becoming a disaster. Cassidy went to pick something up outside the restaurant and smashed her head on the menu sign when getting up. Once we were at our 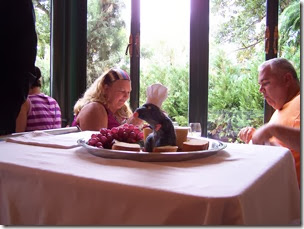 table, Cass discovered that she had lost one of the decorations from her MagicBand. As much as I love the MagicBands, those MagicBandits do a good job of describing the person at Disney that came up with them. They are only connected to your band by one peg in a hole and they’re going to get lost with all of the climbing into rides and moving around the parks that you do. Both Jenne and Cass lost one during the trip and that’s ridiculous.

What ended up saving the meal was a little bit of Disney Magic that is no longer available. That Magic was a visit from Chef Remy. This was a very cool part of the meal. Remy looked awesome and the person pushing his cart around the restaurant was very funny. One person called Remy “Ratatouille” and was told, “That is not his name, that’s a meal in France. You’re from America and we do not call you ‘Mac and Cheese’” The food was yummy and the service was great. It’s a shame that there will not be any more Remy meet and greets. Remy is getting his own ride, but you have to go overseas to check it out. It looks like it is going to use technology similar to what SeaWorld used for their Antarctica ride. I’d love to see Disney put that technology into one of the Florida parks. An Avatar ride with that technology would get me to ride even though I could care less about the movies.

After lunch, we split up for a little while. Jenne made her way to the Disney Lost & Found to see if they had the camera that she had lost (we think on Soarin’) earlier in the trip. When she called to find out about the Lost & Found, they made no mention of the time limit in place in order to claim items. Once she got there, they weren’t much of a help for her which put a bit of a damper on things. The Disney Magic does not extend to that part of the park.

Meanwhile, Cass and I were calling an audible and changing plans slightly. We had originally planned on starting at Epcot, going to Animal 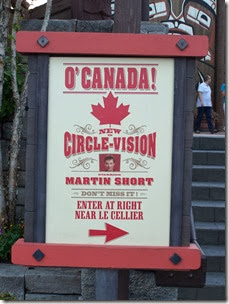 Kingdom to finish some Wilderness Explorer stuff, and then finish at the Magic Kingdom, but that didn’t flow so well. We decided to cut Animal Kingdom from the equation and spend a little more time in the other two parks. That gave us time to stop by Canada and see O’ Canada with the awesome Martin Short. When we got to the waiting area and saw that it was 15 minutes until the next show, I wanted to leave, but Cassidy convinced me to wait and I’m glad that I did. This film is funny and does a good job of showing the diversity of Canada. Cass enjoyed it and I enjoyed it so it was time well spent.

On our way out of the park we grabbed some Mickey Premium Ice Cream Bars and relaxed for a little while with our snacks. There was some browsing to be done in the Art of Disney store on the way out. There are so many amazing things in that store. If I had a huge house and tons of money, so much of it would be mine, but I’ve got neither the space nor the funds to have my own little Disney art museum.

We hopped on the monorail for the trip to the Magic Kingdom and met a nice family during the ride. The son 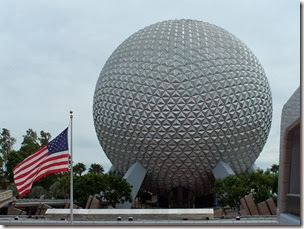 was a little older than Cass, but was in the middle of his first trip to Disney World. He was having a blast just riding the monorail and taking in the whole experience. I remember being the exact same way 30 or so years ago.

We arrived at the Magic Kingdom and made our way directly to the Fire House on Main Street. We picked up two packs of Sorcerers of the Magic Kingdom cards and started on our first adventure. This game is a lot of fun and is a perfect way to spend part of the day in the park. We started with an adventure on Main Street, then fought the forces of evil in Liberty Square, again defended the Crystal of the Magic Kingdom in Adventureland, and conquered our final rapscallion in Fantasyland. Along the way, we had two different people stop to talk with us and give us some of their extra cards since we were brand new to the game. This is something to try at least once during your next trip to the parks. A single adventure only takes 15-20 minutes depending on how busy the portal locations are.

Jenne had arrived at the park during our fourth and final adventure. She took advantage of that time to take a ride on Pirates of the Caribbean 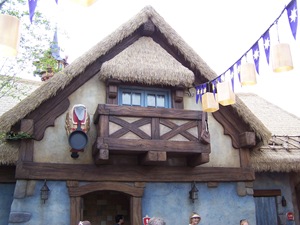 since Cass was suddenly terrified of the ride and wasn’t going on. She was lucky that she went on when she did because the ride wasn’t running properly when she was on it and was shut down for most of the rest of the day. From there, she made her way to Fantasyland to meet up with us. We made another stop at the Rapunzel themed bathrooms on our way over to Adventureland.

There’s another game to be played in Adventureland and this one was right up Jenne’s alley since it was pirate themed. This thing was extremely cool. You start off at The Crow’s Nest where you begin your adventure. This was designed for use with MagicBands, but there are cards that you can get which will also work (just like Sorcerers of the Magic Kingdom). You are given one of 5 adventures, you take the corresponding map, and then head off to the first destination that you are given. Once you find that location, you tap your MagicBands to the icon that you’re looking for and a recording will start. There will also be something cool that happens such as a cannon firing or a ship appearing that corresponds to the location that you are at. You get your next clue and then continue on to the next location. Each adventure has 4 or 5 locations that must be found before you discover that adventure’s treasure. Unfortunately, we only had time for three of the five missions before we had to call it a day.

We stopped at the Art of Disney store on the way out with the intention of purchasing two statues to be shipped home. They had the Roger and Jessica Rabbit statue that I wanted, but didn’t have the Jack and Sally NBC statue that Jenne wanted. After what seemed like forever, we had the 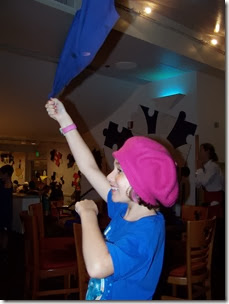 statue purchased and ready to ship home. Once that was finished, we had to hustle over to the Contemporary for our reservation at Chef Mickey’s.

Chef Mickey’s is fun and it’s a great way to meet the Fab 5 all at once, but it’s not a culinary delight. It’s a buffet, so there’s plenty to choose from, but not much of it is any good. Cassidy had a blast waving her napkin around and dancing with the characters. They all come right over to your table which is a pleasant change from waiting in line. It also made the whole autograph book thing a lot easier since some of the characters had a tough time holding the book while they were signing it.

The Contemporary is my kind of hotel. They had a bank of 6 pressed penny machines in the lobby and I grabbed a bunch for my collection. We experienced more Disney Magic while waiting for the monorail back to the parking l…Transportation and Ticket Center. One of the Cast Members manning the monorail platform had a little LED light that he used to do some quick little magic tricks for Cassidy that brought a huge smile to her face.

We returned to the hotel, but Cass and I weren’t ready to call it a night yet. We made our way back to the main hotel building and spent some time in the arcade. They had a bunch of cool games in there including a Pac-Man air hockey game that was awesome. Much fun was had and Cassidy ended up with some cool prizes when all was said and done. Midnight pounced upon us quickly and we had some credits left, so Cass made a plan to show Jenne her favorite game the next morning after we finished breakfast. This game was a more fun version of Spider Stomp. There were three colored buttons to step on and also three colored button to hit. It’s one of those games where it wants you to move so quickly by the end of it that you’re tripping over yourself and hilarity ensues.

This was an awesome day to end our trip. 4 new experiences for our list and a chill day to send us home on a relaxed note.